Her favorite bands/artists include all of the above, as well as Underworld, the Cure, Sault, Dry Cleaning, Laura Mvula, Radiohead, Public Service Broadcasting, Boards of Canada, Black Country, New Road, Nubya Garcia, Sofia Kourtesis, Floating Points, and always Janet Jackson. Given WFUV's equally eclectic nature, she is thrilled to be part of the WFUV team and to program and host "UKNY" on Sunday nights at 11 p.m., an hour-long excursion into new British and international music.

Kara is the former producer of Vin Scelsa's "Idiot's Delight," where she learned about smart interviews and the art of the meaningful segue. She also worked as a reporter for MTV News, covering hard news stories, braving the dark days of boy bands, and interviewing the likes of George Clooney, M.I.A., and Dave Matthews. She has also written for Rolling Stone magazine, doing features on bands like Elastica and Weezer. She originated the Raves column and quizzed everyone from Björk to Noel Gallagher. She's reviewed more albums than she can recall. Kara also co-wrote liner notes to the Grammy-nominated Rhino box set "Respect: A Century of Women in Music."

Kara is a graduate of Columbia University's M.F.A. program in playwriting and recipient of the 2007 Princess Grace Award. Her plays have been performed or developed via the Royal Court Theatre, Out of Joint, Hampstead Theater, the O'Neill Playwrights Conference, MTC, MCC, Atlantic Theater, Playwrights Horizons, Page 73 Productions, TheatreWorks Silicon Valley, etc. She is a member of the MCC Theater's Playwrights Coalition and is a MacDowell Colony fellow and an alumnus of the 2008-2010 Women's Project Playwrights Lab. She was the literary manager of the Irish Repertory Theatre for 15 years.

Kara resides in Manhattan, though she has aspirations for a pretty garden flat in overpriced north London.

Shows from this DJ

We'll take that off your hands 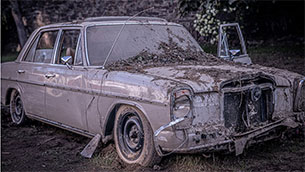 Stuck with a car, running or not?
Turn it into music with an easy vehicle donation to benefit WFUV. It'll feel good and sound good. [more info]