Slothrust in Studio A (photo by Dan Tuozzoli/WFUV)

Slothrust is a band out of Los Angeles. Based on their name, you might think it's a heavy metal band or maybe some kind of comedy team —  but the trio is definitely not joking around. Well, maybe a little bit actually.

Frontwoman Leah Wellbaum does have a wicked sense of humor. She’s originally from Boston but went to school at Sarah Lawrence College in Bronxville, New York, where she met her band mates Kyle Bann and Will Gorin. They formed the Slothrust about 10 years ago and have been knocking out audiences with their high-energy shows ever since.

The goal of the group's first three albums was to accurately capture their kinetic live sound. However, on their new release, The Pact, Wellbaum, Bann and Gorin chose to experiment and explore what it was like to make a proper studio album.

On this FUV Live session, the full story behind the making of The Pact, and some riveting performances too. 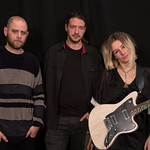 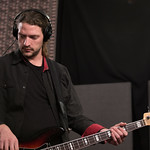 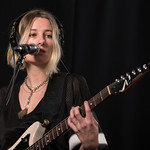 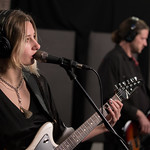 Middays
with Alisa Ali
SUPPORTED BY