Social and communal aspects are among the most treasured elements of record stores. Being surrounded by wax and flipping through the bins, while exchanging remarks with friends and strangers, is an endangered but not extinct pastime. I recently had the chance to do so while shopping at Rough Trade NYC in Brooklyn with Holiday Cheer and Slingshot artist Lo Moon.

On November 6, the L.A.-based trio played their first headlining gig in the back room of the Williamsburg record shop; it's an intimate venue for about 250 fans. The front part, however, is one of the few record stores that remains in New York City. With some money to play with (thanks to the band's label, Columbia Records), it was Lo Moon's job to buy some tasty albums to be given away later by WFUV and the trio. I got to hang out with Lo Moon while they did it.

Long Island's Matt Lowell and his cohorts Crisanta Baker and Sam Stewart all revealed some of their favorite artists and influences while amassing a goody bag that would be a most welcome addition to any collection. I got turned on to two albums that I was unfamiliar with: Ravedeath, 1972 from Tim Hecker, which came out in 2011, and Rhythm & Sound's See Mi Yah from 2005.

Hecker is a Canadian electronic musician whose foundation for this album was recordings of a pipe organ captured in a Reykjavík church. He then supplemented and manipulated it with all manner of effects. Ravedeath, 1972 served as a frequent soundtrack during Lo Moon's sessions for their forthcoming debut, produced by Chris Walla, who Lowell mentioned was also a big fan of Hecker. Baker also told me the album makes an excellent aural companion while reading novelist Haruki Murakami's 1Q84.

Stewart explained that Rhythm & Sound is an alias of the German production duo Basic Channel, whose initial recordings in the '90s could be classified as minimal techno. On See Mi Yah, they recruited an impressive array of Jamaican artists to help them explore dub. I'm very keen on dub myself and recommended Mad Professor's collaboration with Massive Attack.

Considering the aforementioned albums, the inclusion of Aphex Twin was no surprise and Lowell pointed to Talk Talk also being an essential group for him. The palettes of Lowell, Baker, and Stewart also accommodated albums by artists like Pink Floyd (Lowell referred to the gatefold of Dark Side of the Moon "the best artwork of all time"), Chet Baker, Bruce Springsteen, and David Bowie. Stewart considers Neil Young his "number one" while Baker recalled an Al Green concert as a favorite. This year's release by The War On Drugs, A Deeper Understanding, was given the nod as the most played disc in the touring van; Lo Moon uses the song "Holding On" as inspiration before taking the stage.

Not long after these acquisitions were made, the shoppers resumed their role as music makers and turned in a memorable performance on the Rough Trade NYC stage. Their excellent set made more than one fan express eager anticipation for the band's Holiday Cheer for FUV appearance at the Beacon Theatre on December 15.

And for their part, Lo Moon expressed great enthusiasm — and some wonder — that they'll soon play that historic venue on a bill with Jeff Tweedy, Randy Newman, and Aimee Mann.

These are the full shopping list results, with a Spotify sampling below: 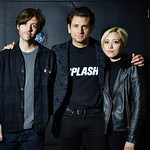 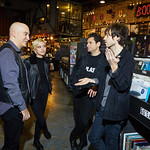 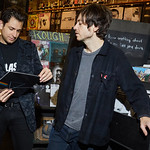 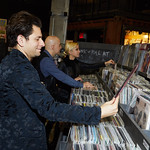 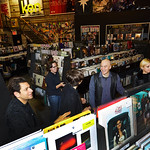 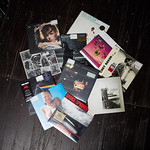