It has been my pleasure over the years to welcome and interview some amazing individuals at WFUV. This was one of those special moments, especially as a longtime fan of 1984's "This is Spinal Tap," Rob Reiner's irreverent and legendary rockumentary parody.

Derek Smalls, the celebrated bassist of Spinal Tap (who also happens to be actor Harry Shearer) recently released his first solo album, Smalls Change (Meditations Upon Ageing), a collection of songs that deal with aging, but not gracefully. To very loosely paraphrase Dylan Thomas, Smalls describes his album as “halfway between 'rage against the dying of the light’ and trying to find the light.”

According to Smalls, it’s a remarkable work. Smalls Change (Meditations Upon Ageing) features appearances by many legendary guests who, despite Smalls's warnings to not get involved, agreed to participate, like Steely Dan's Donald Fagen and Jeff “Skunk” Baxter, David Crosby, the Foo Fighters' Taylor Hawkens, Jane Lynch, Paul Shaffer, Richard Thompson, Dweezil Zappa, and many, many more.

Smalls was the executive producer of the album, although he admits that he's not sure what that means).

I hope you’ll join me for what will surely be an experience that should be cranked to 11 on the dial, chatting with Smalls (and Shearer)! 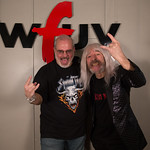 Derek Smalls
3 years ago ago by WFUV Public Radio. 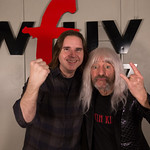 Derek Smalls
3 years ago ago by WFUV Public Radio.

Nights
with Darren DeVivo
SUPPORTED BY

Baio with Alisa Ali at WFUV (photo by Nick D'Agostino)

Question of the Day
Searching