Banjo virtuoso Béla Fleck is a New York native, but he really belongs to the whole wide world of music. In addition to his work with the New Grass Revival and the Flecktones, he's collaborated equally comfortably with bassist Edgar Meyer, pianist Chick Corea, and musicians in Africa where the banjo originated. According to Wikipedia, he's been nominated for Grammy Awards in more categories than any other musician: country, pop, jazz, bluegrass, classical, folk, spoken word, composition, and arranging.

Béla's latest collaboration is with his wife, Abigail Washburn, a fellow banjo player whose own explorations have led her to fusing Chinese and Appalachian music. When they play together, it's not merely dueling banjos, but the meeting of two creative musical minds, and their performance at Clearwater showed their chemistry on both musical and personal levels.

(We unfortunately aren't able to post the audio for this set). 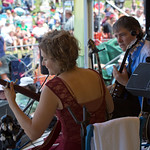 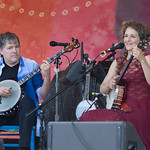 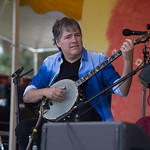 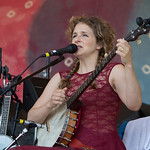 Pokey LaFarge and band at WFUV. (Photo by Nick D'Agostino)

Question of the Day
Autumnal Songs