When Pure Bathing Culture's Daniel Hindman and Sarah Versprille visited WFUV's studios, they observed that it was the second time they'd been to our Bronx studios. Their first time? As touring musicians with Andrew Cabic's Vetiver.

Their work with Cabic  — and a subsequent friendship with musician and producer Richard Swift — led the Brooklyn-based couple to relocate to Portland, Oregon in 2010 where they eventuallly formed Pure Bathing Culture. The pair released their graceful debut, Moon Tides, earlier this summer and will return to New York on November 8, opening for Widowspeak at Bowery Ballroom. On the road, Hindman and Versprille recruit bassist Zach Tillman and drummer Brian Wright to expand Pure Bathing Culture's lineup.

Watch videos of Pure Bathing Culture live in Studio A, read interview highlights and listen to the full session in the FUV and TAS archives now.

Kara Manning: You’ve been [to WFUV] in the past as part of the backing band for Andy Cabic and Vetiver. Are you still a part of Andy’s touring crew?

Daniel Hindman: We have been. He hasn’t really done any major tours recently and we both hope that we’ll be a part of it. He just came to Portland and visited some friends. He came over and showed up some new music for the upcoming record that he’s working on which sounded really amazing. Hopefully we’ll be playing with him again soon, whenever he’s ready.

Kara: Moon Tides, your debut album as Pure Bathing Culture, is one of the prettiest records of the year. A lot of it came about because of that hiatus from Vetiver and you met Richard Swift, your producer, through [Vetiver], correct?

Sarah Versprille: Yes, Richard was touring and opening for Vetiver, early on after we joined Vetiver in 2009. We met him on that tour and got along really well. Then we played in his band shortly after, the following summer. We played in his band periodically over the years. He was one of the first people who we showed music to when we started, sporadically, working on it.

Kara: He hooked you up with working with Foxygen and Damien Jurado as well?

Kara: So you’ve been touring — or backing — musicians for other people. Did you feel that you needed a certain bravery to commence your own band?

Daniel and Sarah (together): Yes!

Daniel: Definitely. I think we still need bravery. Putting a record out has been really frightening for us. Putting something out that people cover in the press and write about, whether they say good things or bad things, it feels really fragile to you. Yeah, we had to get brave to do this.

Sarah: I think when we started doing it we were thinking about making music together ... but at least I wasn’t thinking about how brave one might need to be to push it out into the world.

Kara: Sarah, being the frontwoman now, you [have to carry yourself] in a different way. Watching you soundcheck the first song, “Pendulum,” it was interesting to [observe] a certain Stevie Nicks quality to you. And you also sing very close to the mic. How did you adapt your style for live performance?

Sarah: It’s been a work in progress. I think it’s changed a lot for me as we’ve played live. When we recorded the EP we’d never played a show. Then, all of the sudden, we had this music and we [needed to start] playing shows. I feel that I’ve learned most of what I’ve been doing really naturally, just being on the bandstand playing music with the band. Feeling how [it is] to be that person on stage which is very different from being in someone [else’s] band. But it’s really fun for me and I get a total kick out of singing the music.

Kara: Daniel, was there ever a conversation about who would be the singer of Pure Bathing Culture?

Daniel: No! (all laugh). The first song that we ever wrote together was a song off our EP called “Lucky One.” I just came home one day and Sarah had put vocals on top of some music I had written so that was the template of how it works.

Kara: Daniel, [as I watched] you play on “Pendulum,” I thought that there is a real Lindsey Buckingham influence to what you do. You’ve also chatted in the past about Vini Reilly of the Durutti Column being an influence, that latticework [texture] on guitar. Can you talk a bit about your approach to guitar and how that informed Moon Tides?

Daniel: Those are definitely two of my favorite guitar players, probably my most favorite guitar players. Those two guys are at opposite ends of the spectrum too. Lindsey is this very virtuosic player who does solos and Vini Reilly is more latticework, the sound that is the production of the track. With Pure Bathing Culture there’s tons of guitarwork everywhere. The songs usually start on guitar and we love to layer guitars in the studio. So I think Vini Reilly’s approach really influenced me in this band. [It's] something I think about a lot. Also the drum machines in the Durutti Column stuff. How big and vibe-y a track can sound with just a simple drum machine and a guitar. Another person that really influenced me was JJ Cale. Simple, vintage drum machines and guitars can make a really big sound.

We’re not trying to participate in some zeitgeist moment of dream pop. We wouldn’t be a boy-girl duo if there were more people that we wrote songs with. I think that utilizing those textures and aspects of pop culture history is just a natural progression. We don’t try to define ourselves with that; we might do something completely different for our next record.

Kara: I think you said in an interview, Daniel, that your next album would be totally different.

Daniel: We’re definitely working on it conceptually and just starting to write it. We definitely want to do something a lot more expansive. This recording was very minimal, everything was really fast. We didn’t spend a lot of time on the tracks. There’s a lot of honesty in it, but there wasn’t a ton of thought or production. I think for the next record we’ll try to do something more emotionally expansive. We’ll see what it is. But I know it will be different.

Kara: What was it that your producer Richard Swift brought to the mix? He’s been a tireless advocate of your sound.

Sarah: He is and that’s a huge thing that he brought to the table for us: support and always being there, in the studio, doing something. He always would say, “Yes! That sounds good.” [He] encouraged us to make the sound that we were hearing and making us feel good about doing it.

Daniel: I think we did feel funny at first. This is a band? This is what we would do? Record all of these guitars direct and have these drum machines? Call it this weird name? And Richard was always there to go, “Yeah dude! Yeah! That’s f**king great!”

Kara: Do you think Richard is the one who really pushed you to create this band?

Daniel: For me, definitely.

Daniel: He was the first person to make me feel valid about it. He was in a community of people that we respected. Yeah, he was at the beginning of things for us.

As soon as we began writing the songs, we knew we were onto something that was honest and representative of what we were going through in our lives. 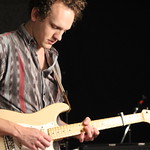 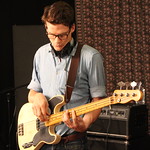 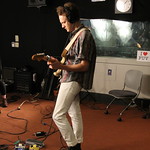 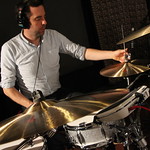 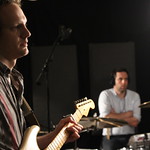 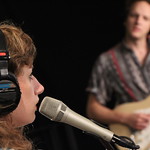 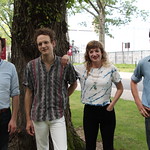 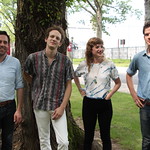 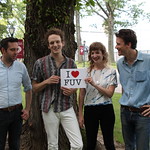 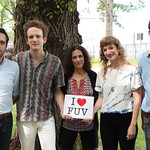 Drenge with Eric Holland at WFUV (photo by Sarah Burns)

Question of the Day
Live Performances

Question of the Day
Coffee