Toro y Moi, aka Chaz Bundick, joined the madding crowds at SXSW last week for a series of showcases. By month's end, Bundick and his bandmates are headed to South America, supporting his third and — in his estimation — most deliberately "pop" album to date, Anything in Return.

Watch videos of the four-song set, including "High Living" and "Grown-Up Calls," and read highlights of Bundick's conversation with The Alternate Side's Alisa Ali.

Anything In Return is out on Carpark Records now.

UPDATE: Listen to the Toro Y Moi session in the WFUV archives now.

Alisa Ali: You were doing some falsetto.

Alisa: A lot of guys say that is the one thing that kind of scares them but they do it anyway.

Chaz: It’s not too bad. I think I started doing falsetto when I first started Toro y Moi. I was in my room and there wasn’t anyone to hear me sing high notes and I think that’s where it started.

Alisa: Now you’re singing in front of everyone. When did you first start singing?

Chaz: I started singing in bands when I was 15. I guess that’s the start of it. Before that I’d sing along to songs, but everyone does that.

Alisa: What did your high school band sound like?

Chaz: Freshman year. Me and Patrick. It was kind of post-indie rock, like At The Drive In, sort of. And then the next band after that was The Heist which was more indie rock, like Interpol, Broken Social Scene, indie rock!

Alisa: What’s the next genre you’ll go to?

Alisa: Sweet ... I understand that you also graduated college; a lot of musicians drop out.

Alisa: You were a graphic design major. What was the shift in focus?

Chaz: Graphic design is my passion too.

Chaz: I have three.

Chaz: I was doing graphic design and was focused on that in school. The music thing just happened. I wanted to do it seriously so I put my focus on that once Carpark showed interest. I put some songs on the internet and it got some buzz.

Chaz: It was kind of all I did. I was doing graphic design in the daytime and at night, after school, I’d record music at home. I’ve been doing Toro y Moi since I was 15. Started off on a four-track cassette recorder, now it’s here.

Alisa: You said that when you listen to your first album, [2010's Causers of This], all you hear are laptops and you wish there were live instruments on that record. That said, I don’t see a single laptop here.

Chaz: It’s inside of my Nord. There’s a computer in there. Yeah, making electronic music is an interest of mine, but so is playing with a traditional arrangement. The live band was always a goal for Toro y Moi even before I started being noticed. When the time came to play shows, it was definitely a goal to get the band together. [This band] is all longtime friends. Patrick and I went to high school together. Andy and I were roommates. Jordan was a camp counselor.

Chaz: Yeah, he was actually our skate camp counselor. At the skate park. I met Jordan through skateboarding. We broke two decks already on this tour.

Alisa: What is a deck?

Chaz: A piece of wood.

Alisa: What are we talking about? A ramp?

Chaz: A skateboard is just a piece of wood with wheels.

Alisa: Chaz, I read that you said that this album was just for fun. You were just trying to make music that your girlfriend would dance to? I really hoped that you were still together.

Chaz: Oh, yeah. We’re longtime daters. The only song I was referencing was “Cake” and that was me just trying to make a pop song. It’s fun, every once in a while, to make a fun song that people can relate to, not referencing obscure soundtracks.

Alisa: Clearly you have an affinity for that specific genre of music.

Chaz: Some of the radio music.

Alisa: You described this record as your “pop record.” You’re sticking by that?

Chaz: In a way. Most of my songs are pop. I don’t think I go too far outside of that. To me, pop is whenever something is accessible and people can relate to it, no matter what kind of instruments you use or how it’s produced. It’s melodic.

Alisa: I don’t know if I’d describe this record as pop, but I like it. Maybe the “Cake” song is the poppiest. In your estimation, what is good quality pop music?

Chaz: Okay, commercially successful and then maintaining a fan base, I’d say bands like Talking Heads, Radiohead, the Flaming Lips, Sonic Youth, Weezer — they’re doing it smartly and they’re not being used.

Alisa: That explains a lot, because I’d never consider any of those bands pop!

Chaz: It’s cool to get to arena status but not worry about getting cheesy.

Alisa: You never worry about being cheesy?

Chaz: No, you just have to be yourself. There’s a lot of musicians out there now trying to be characters and it’s ridiculous. It’s the internet that’s doing that too, the internet is creating memes and everyone’s trying to go viral. Trying to get that fast check. I’m really working on trying to build something. That’s what we’re trying to do. 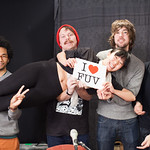 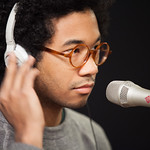 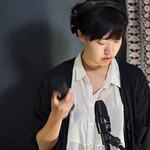 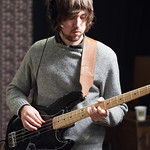 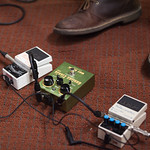 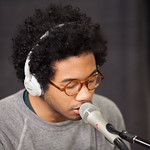 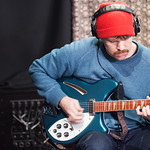 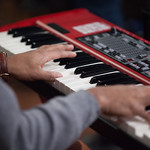 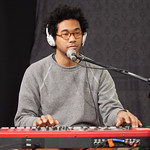 Drenge with Eric Holland at WFUV (photo by Sarah Burns)

Jealous of the Birds: 2018
SUPPORTED BY

Question of the Day
Strings Attached